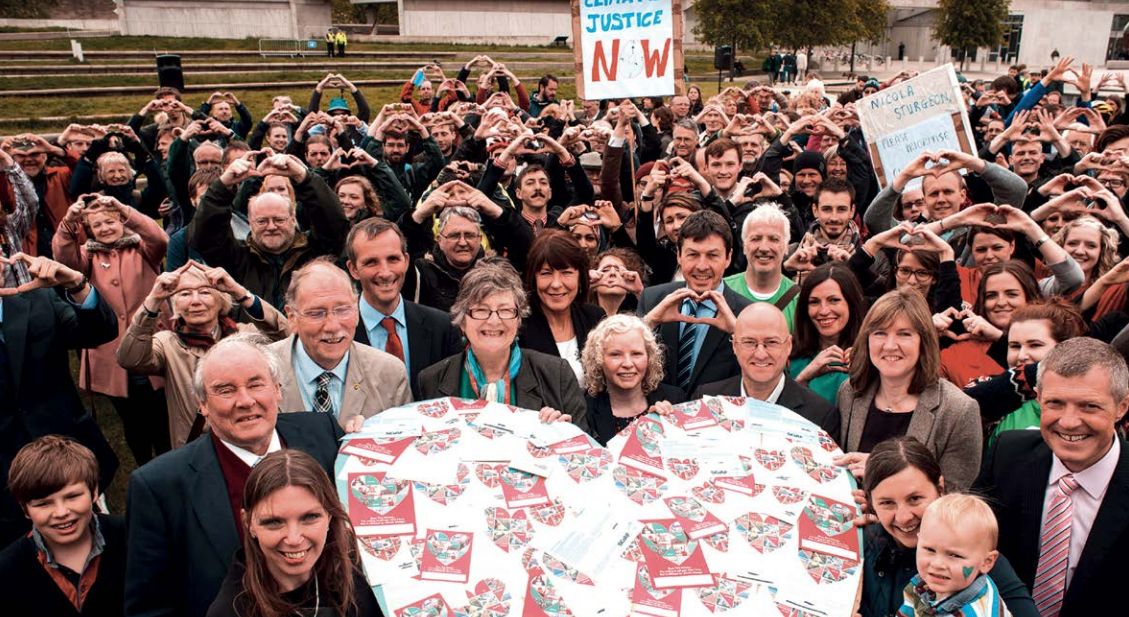 Climate change is one of the major threats to human existence. However Scotland is leading the way in implementing change which could bring the Earth back from the brink.

Stop Climate Chaos Scotland (SCCS) is a diverse coalition of over 40 civil society organisations in Scotland which campaigns together on climate change, including environment, faith and international development organisations, trade and student unions and community groups.

“Partnership working was key,” said former SCCS chairman Mike Robinson. “In the early days the crux was to form a coalition that was credible to politicians. We needed wide representation, a diverse range of organisations and groups with large memberships to show we had popular support. That made it easier to agree on the bigger picture and the need to do something about climate change, to galvanise concern and demand genuine action. Agreeing a common agenda and a clear set of aims helped us to win public and political support.”

In May 2007, the Scottish Greens supported Alex Salmond’s election as First Minister, and his subsequent appointments of ministers, in return for early tabling of the climate change bill.

SCSS secured a government commitment to a 42 per cent reduction target by 2020, by initiating a media push with celebrities, business figures and charity leaders the weekend before the final debate on the bill. They also held a rally held outside the Scottish Parliament on the day of the final vote itself, with constituents encouraged to ask their MSPs how they were going to vote.

The Climate Change (Scotland) Bill was passed unanimously by the Scottish Parliament on 24 June 2009. The act set world-leading greenhouse gas emissions reduction targets, including a target to reduce emissions by 80 per cent by 2050 compared to 1990 levels, with an interim target of 42 per cent by 2020. It also imposed a duty on Scottish ministers to report on the progress of these targets and on public bodies to report annually to ministers on their compliance with the climate change duties.

Scotland’s greenhouse gas emissions have reduced by 45 per cent since 1990, which means the target set in the 2009 act to reduce emissions by 42 per cent by 2020 has already been exceeded.

Other charity coalitions have since approached SCCS for advice following its success in persuading the Scottish Government to make climate change a priority.

However the work of the coalition goes on as it aims to influence the ongoing Climate Change Bill.